The Philippines archipelago is comprised of more than 7100 islands yet the total land area is slightly smaller than the British Isles. The astonishing degree of biological endemism within the Philippines is well represented by the country's avifauna, and although the total list for the Philippines is not large at just over 700 species, of approximately 450 resident species more than 250 are endemic.

During this tour we will concentrate on three of the largest islands - Luzon, Mindanao and Palawan which account for more than two-thirds of the land area. They have the largest numbers of endemic species, of which we can expect to see over 140 including such spectacular species as Philippine Eagle, Palawan Peacock-Pheasant, Philippine and Steere's Pitta, Southern Silvery Kingfisher, Southern Rufous Hornbill, Celestial Monarch, Philippine Trogon and Cinnamon Ibon, potentially an endemic family. In addition, there's an amazing set of endemic owls to see, a spectacular set of endemic kingfishers including Spotted Wood and Southern Silvery Kingfishers, and Spotted Wood Kingfisher, and a brace of racquet-tails among the endemic parrots which contain such exotic-sounding species as Colasisi and Guaiabero.

Sadly, much of the rainforest which once cloaked these beautiful islands has already disappeared and many bird species which are dependent on primary forest are in serious decline. However, the Philippines still offers some of the most exciting and fascinating birding in Asia including many of the regions rarest and most desirable birds.

‍Day 2:
Today we will depart early to cross Manila heading for Subic Bay for a two-night stay. We will spend all day starting our Philippine birding in style as there are several target species to be found that are difficult to see elsewhere including Green Racquet-tail, Blue-naped Parrot, Rufous Coucal, Luzon Hawk Eagle, Rufous Coucal, White-lored Oriole, Blackish Cuckooshrike, Philippine Fairy Bluebird, Luzon Flameback, Luzon (Philippine) Pygmy and Northern Sooty Woodpecker, Green-backed Tailorbird, Luzon Hornbill and hopefully the localised White-fronted Tit. At night we will concentrate on finding Chocolate Boobook but we might also find Luzon Boobook and Philippine Scops Owl if we are fortunate. Night at Subic Bay.

‍Day 3:
We will again spend the whole day birding around Subic Bay Naval Base. The remaining lowland rainforest within the American Naval Base at Subic offer excellent birding and we will still have some of the localised specialities to find as well as a chance for more widespread species which might include Bar-bellied Cuckooshrike, Luzon (White-browed) Shama, Luzon Balicassiao, Philippine falconet, Stripe-headed Rhabdornis, Red-crested Malkoha, Spotted Wood Kingfisher, White-eared Brown Dove, Philippine Green Pigeon, Red Junglefowl and two recently recognised endemics; Brown-breasted Kingfisher and Rufous-crowned Bee-eater. Night at Subic Bay.

‍Day 4:
From Subic we will head northwards into the Central Cordillera Mountain Range to Banaue where we will arrive in the afternoon, perhaps having added Indigo-banded Kingfisher along the way. Night in Banaue.

‍Day 5:
We will spend the full day birding around Mount Polis departing early morning to make the most of the early morning bird activity. The remnant montane forest here still holds many Luzon montane endemics including Chestnut-faced Babbler, Luzon Blue-headed Fantail, Philippine Bush Warbler, Luzon (Long-tailed) Ground Warbler, Luzon Sunbird and Green-backed Whistler. Some of these join with mixed species flocks which might give us our first views of more widespread endemics like Elegant Tit, Sulphur-billed Nuthatch, Luzon (Philippine) Pygmy Woodpecker, Philippine Mountain Warbler or Scale-feathered Malkoha, and non-endemics such as Mountain Tailorbird, Tawny Grassbird, Turquoise Flycatcher and if the weather is fine, soaring Eastern Buzzard. Scarcer species we will look for include Mountain Shrike and Luzon Flame-crowned Flowerpecker, Red Crossbill and in lower altitude grassland; Benguet Bush Warbler which is widespread here but extremely difficult to see. During the day we will visit the scenic village of Bay-yo where nearby rivers at the bottom of a steep valley are a reliable site for Luzon Water Redstart. Night in Banaue.

‍Day 6:
Final morning at Mount Polis in search of any specialties we are still missing while keeping an eye out for rarer species like Luzon Racquet-tail, Flame-breasted Fruit Dove, or White-cheeked Bullfinch. If we haven't seen them the previous day, then we will make more night-time excursions for Luzon Scops Owl which are usually easy to hear on the surrounding slopes but difficult to see. If we have time to explore the hotel grounds then we can usually find Yellowish White-eye among the mixed flock of commoner species there, while Bundok Flycatchers hide in the understory. We then drive back south for an overnight start at Clark. Night in Clark.

‍Day 7:
This morning we fly across to Davao on the island of Mindanao. We then make our way into the nearby mountains for an overnight stay at the Eden Resort where on the slopes of Mount Apo where we hope to find two very localised specialities; Cryptic Flycatcher and Whiskered Flowerpecker, with a good chance of Japanese Night Heron which have wintered here in recent years. Night at Eden Resort.

‍Day 8:
After more birding near Eden if required, we drive north to Bukidnon province, stopping at the village of Damitan from where we will trek into the Kitanglad Mountains to a tented camp, which will be our home for the next three nights. We will spend any remaining time in the afternoon birding above the camp and in the evening have our first attempt to see Bukidnon Woodcock ÔrodingÕ near the camp while further night-birding around our lodge could produce Philippine Frogmouth, Philippine Nightjar and with a good deal of luck, Everett's or Giant Scops Owls. Nights at Tented Camp, Mount Kitanglad.

‍Days 9-10:
We will have two full days to explore the remnant forest on Mount Kitanglad. The main targets here will be the magnificent Philippine Eagle - the national bird of the Philippines. We will work both the lower areas and the higher trails up to at least 1800m in search of the Mindanao endemics and other specialities which are restricted to this montane habitat including Mindanao Racquet-tail, Red-eared Parrotfinch, White-cheeked Bullfinch, Short-tailed Starling, Stripe-breasted Rhabdornis, Blue-capped Wood Kingfisher, Olive-capped Flowerpecker, Grey-hooded Sunbird, Apo Sunbird, Apo Myna and if we are fortunate, the skulking Mindanao (Long-tailed Ground Warbler) and slimmer chances of Buff-spotted Flameback or Yellow-breasted Fruit Dove which are also found elsewhere. In mixed feeding flocks we can expect to find McGregor's Cuckooshrike, Black-and-cinnamon Fantail, Rufous-headed Tailorbird, Black-masked Dark-eye, Turquoise Flycatcher, Yellow-bellied Whistler, Mindanao (Philippine) Pygmy Woodpecker and the fascinating Cinnamon Ibon alongside commoner species like Philippine Mountain Warbler, Elegant Tit and Sulphur-billed Nuthatch. There are usually good numbers of overwintering Eye-browed Thrush present and sometimes Mugimaki Flycatcher.While scanning for the Philippine Eagles we might also find Pinsker's Hawk Eagle, Rufous-bellied Hawk Eagle or the resident form of Oriental Honey Buzzard. Nights at Tented Camp, Mount Kitanglad.

‍Day 11:
After some final morning birding if required we depart from the camp, returning to Damitan, before continuing our journey to the east coast town of Bislig where we will stay in Bislig for the next four nights.

‍Day 15:
We depart early from Bislig to spend the morning at a high elevation pass on the way to Davao. Here we can hope to find Lina's Sunbird at its most accessible site. We then drive south again to Davao to connect with our evening flight back to Manila where we stay overnight.

‍Day 16:
After a morning flight to Puerto Princesa we visit a nearby coastal area in search of Chinese Egret, and if the tide is suitable a good selection of waders. In the afternoon we will continue to Sabang on the edge of St. Paul's National Park in time for an afternoons birding which will likely produce a good selection of Palawan endemics like Lovely Sunbird, Pale Spiderhunter, Palawan Flowerpecker, Yellow-throated Leafbird, Palawan Fairy Bluebird, Palawan Blue Flycatcher, White-vented Shama, Sulphur-bellied, Ashy-fronted and Palawan Bulbul, and with Palawan Hornbill, Blue-headed Racquet-tail, Blue-naped Parrot, Palawan Tit and Blue Paradise Flycatcher exciting possibilities. In the late afternoon we will visit a regular area for Philippine Cockatoo and hope to see these Critically Endangered birds as they head to roost. Night in Sabang.

‍Day 17:
Today we will spend a full day birding around St. Paul's National Park. In the beautiful, untouched forest within the park we will expect to find most of the islands remaining endemics, although we need some luck indeed to find the spectacular but very elusive Palawan Peacock Pheasant. Outside the park we will explore other forest patches where we hope to find Ashy-headed Babbler, the skulking yet beautiful Falcated Ground Babbler, Red-headed and Spot-throated Flameback, Black-chinned Fruit Dove and any other endemics not yet seen. Palawan shares much of its avifauna with neighboring Palawan and there are therefore many more widespread species that we don't find elsewhere on the tour such as Fiery Minivet, Pin-striped Tit-Babbler, Common Hill Myna, Black-headed Bulbul, Ashy Drongo, Velvet-fronted Nuthatch and Chestnut-breasted Malkoha.The area near our resort is a good area to search for Palawan Frogmouth and Palawan Scops Owl and we will make a special effort to search for these elusive birds. Night in Sabang.

‍Day 18:
We will spend a final day birding in the St. Paul's area before heading back across the island in the afternoon to Honda Bay where we will take a boat out to an offshore island in search of Mantanani Scops Owl, a true small-island specialist. Night in Puerto Princesa.

‍Day 19:
Today we will bird along the Balsahan river within the Iwahig penal colony. There is considerable overlap with species present at St. Paul's so we have last chances at anything missed so far, plus Melodious Babbler and Palawan Flycatcher which are very difficult elsewhere. We return to Manila in the afternoon and transfer to Los Banos in time for afternoon birding in the nearby grasslands where both Barred and Spotted Buttonquails are possible, with occasional sightings of the elusive Plain Bush-hen. Night in Los Banos.

‍Day 20:
Morning birding at Mount Makiling which still has some of the finest forest in the Philippines. We can expect to see several widespread endemics together more difficult species including the stunning Scale-feathered Malkoha, Red-crested Malkoha, Philippine Trogon, Luzon Hornbill, Luzon (White-browed Shama), Flaming Sunbird, Spotted Wood Kingfisher and even rarities such Luzon Bleeding-heart are occasionally seen. Nearby rivers are home to Indigo-banded Kingfisher and night-birding is often rewarding here with a good chance of seeing both Philippine Boobook and Philippine Scops Owl if not seen already. In the afternoon we visit a well-known site for Philippine Eagle Owl before continuing into Manila for an overnight stay.

‍Day 21:
Our final morning will be spent in Metro Manila where a local park has become the easiest place to find the otherwise skulking Ashy Thrush, with a good chance of Lowland White-eye, Grey-backed Tailorbird and Philippine Magpie Robin, a newly recognised endemic which is difficult elsewhere. Afternoon transfer to airport to connect with international flights.

Accommodation: comfortable twin-bed, and single rooms, all with private facilities except at Mount Kitanglad, for 3 nights where we stay in a tented camp (one participant per tent).

Walking difficulty: walking is generally easy to moderate throughout with predominantly roadside birding. The exception is at Mount Kitanglad where we walk use a trail going up and down the mountain on both birding days, the trail climbs steadily and is only steep in a few short sections, with a maximum elevation change on one day of 1400-1850m.
The maximum elevation on the tour is <2,000m. 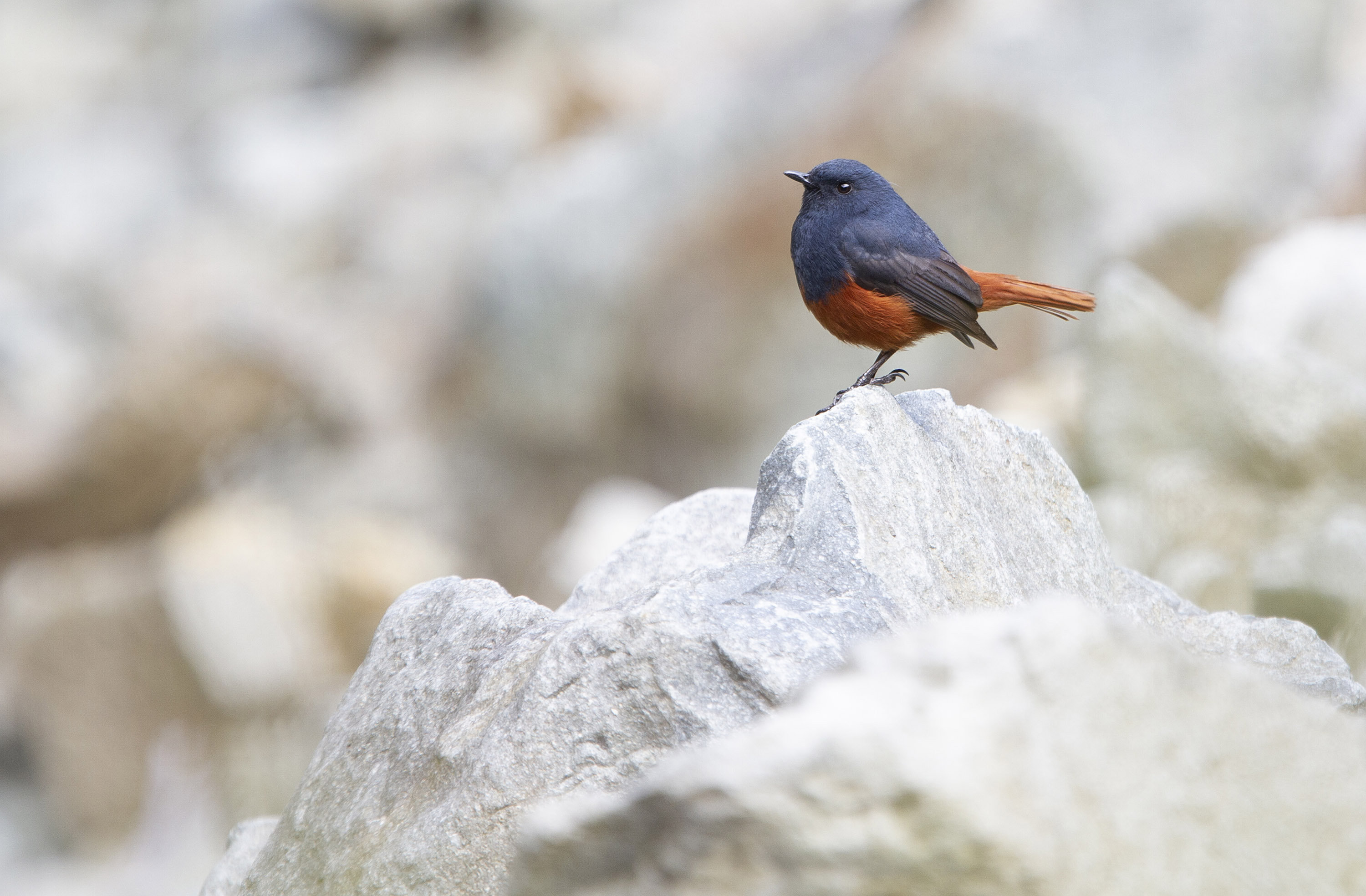 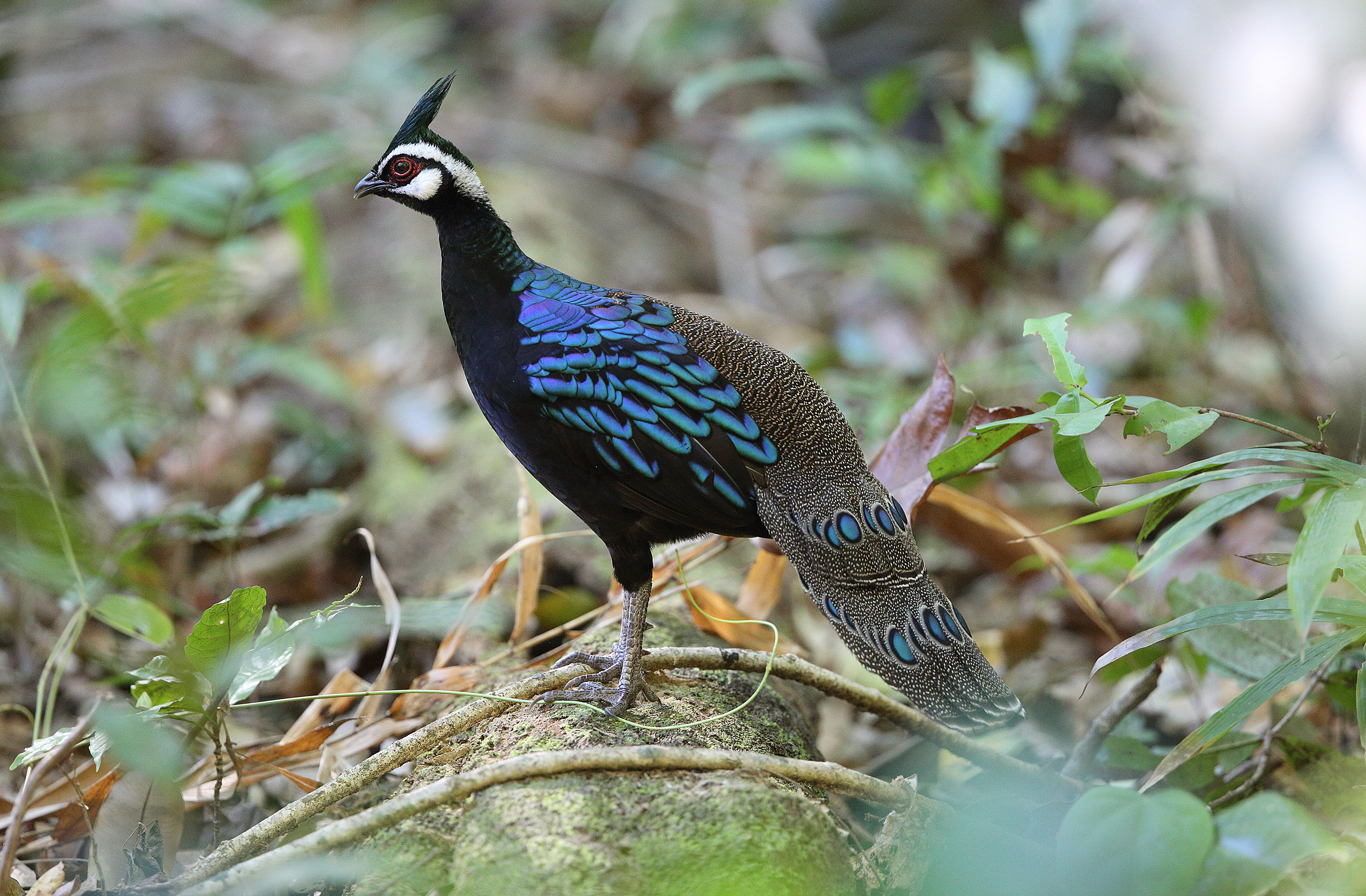 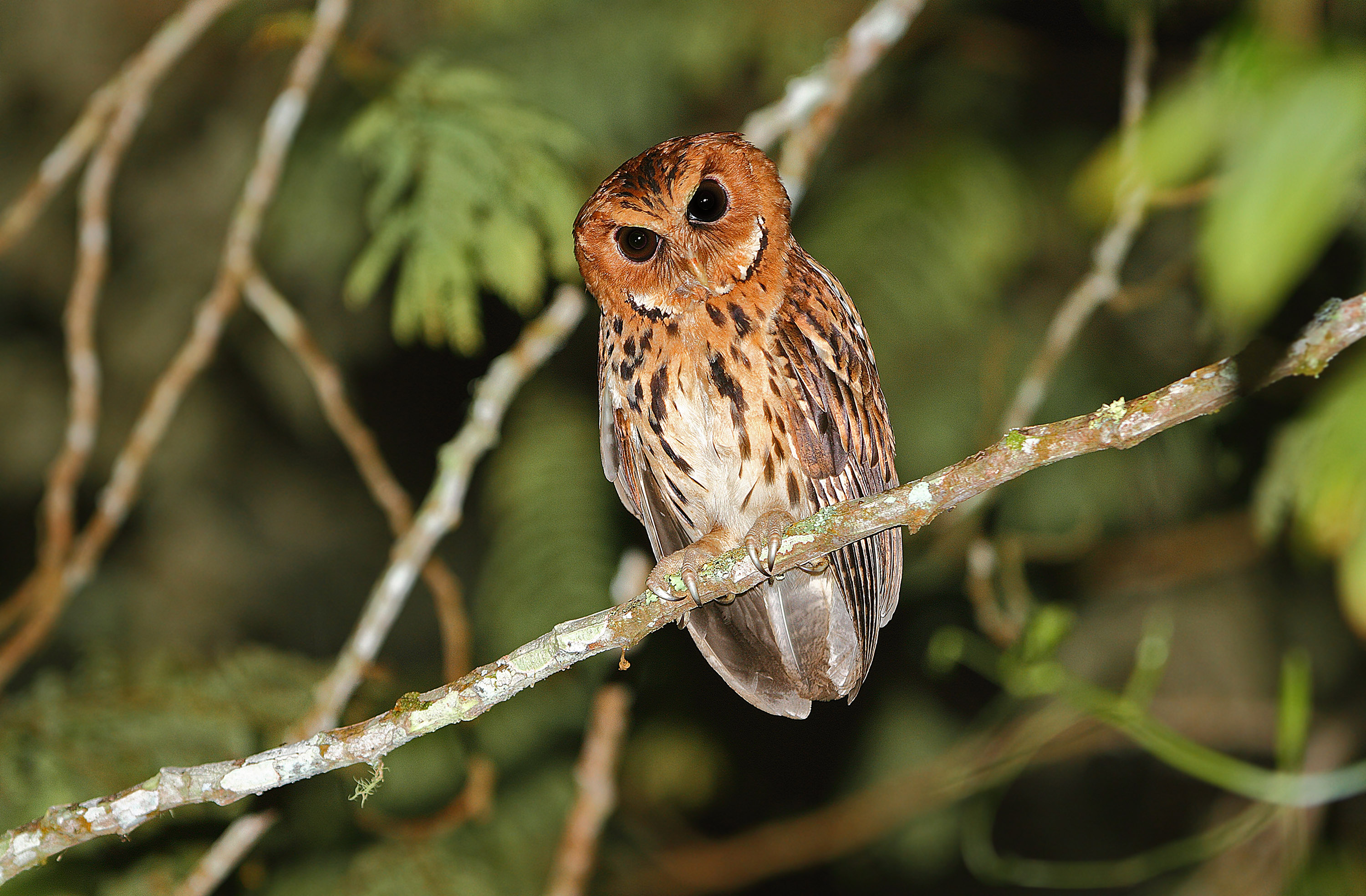 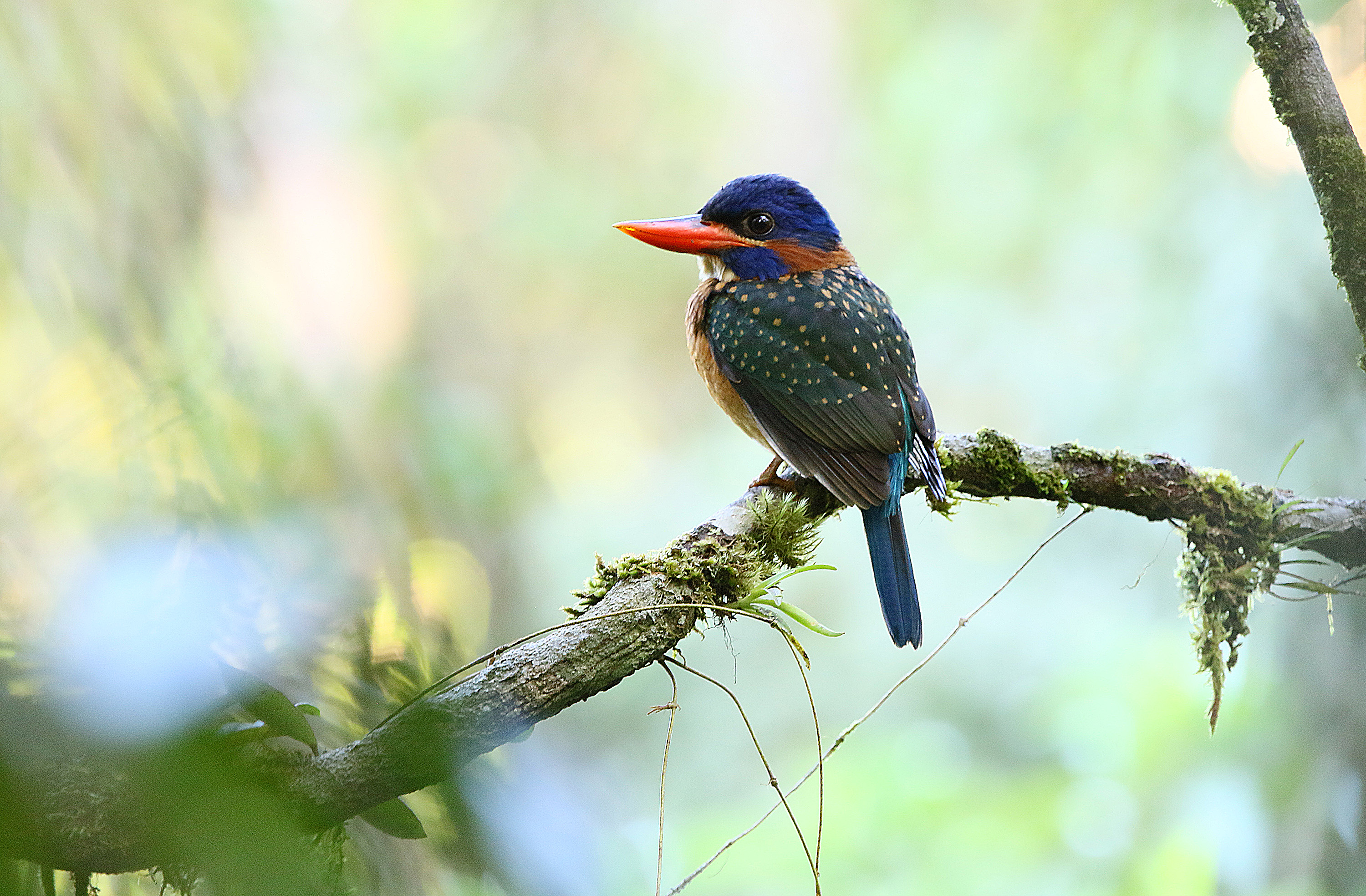 Photos of species possible during the Philippines tour. 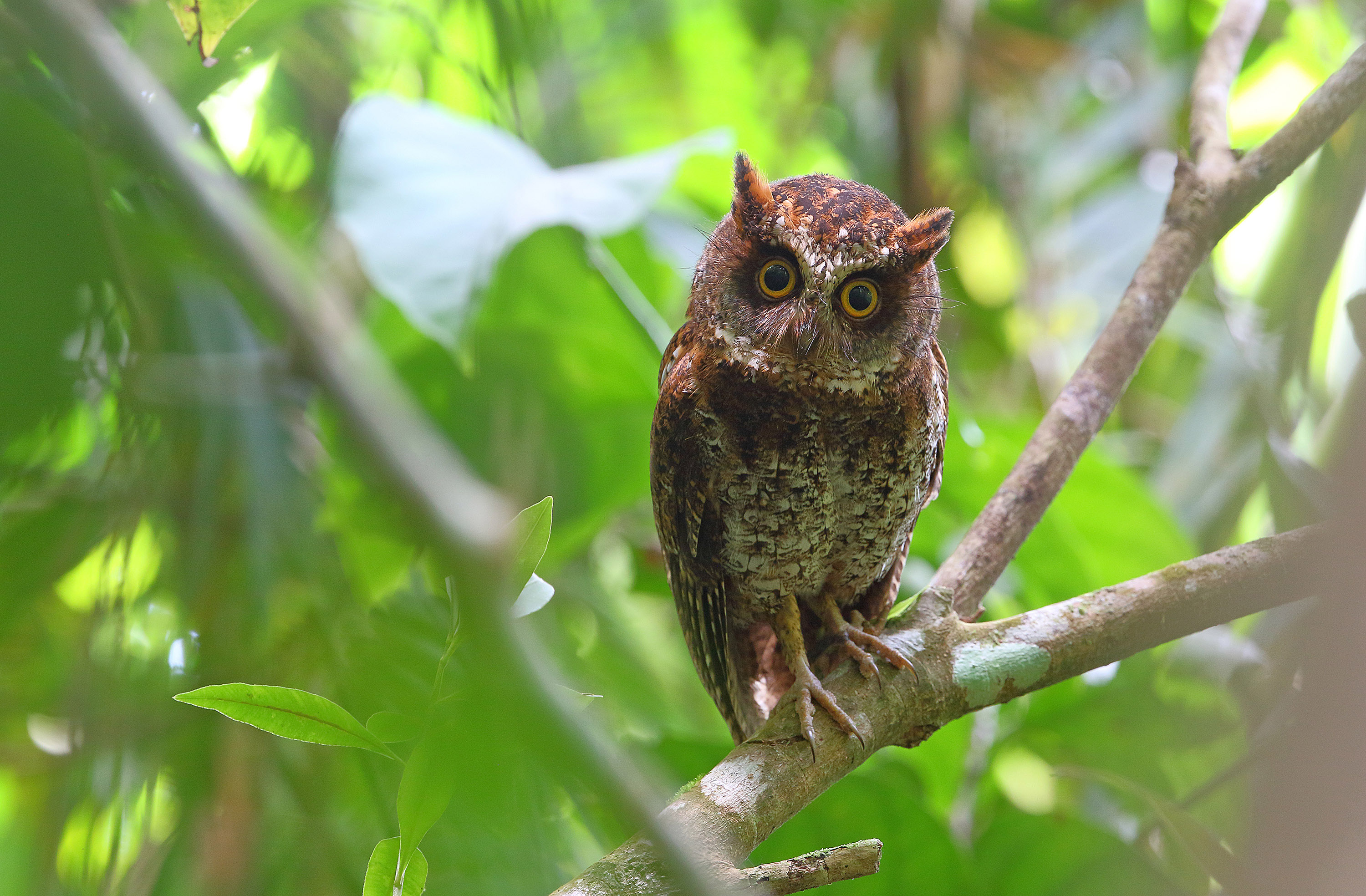 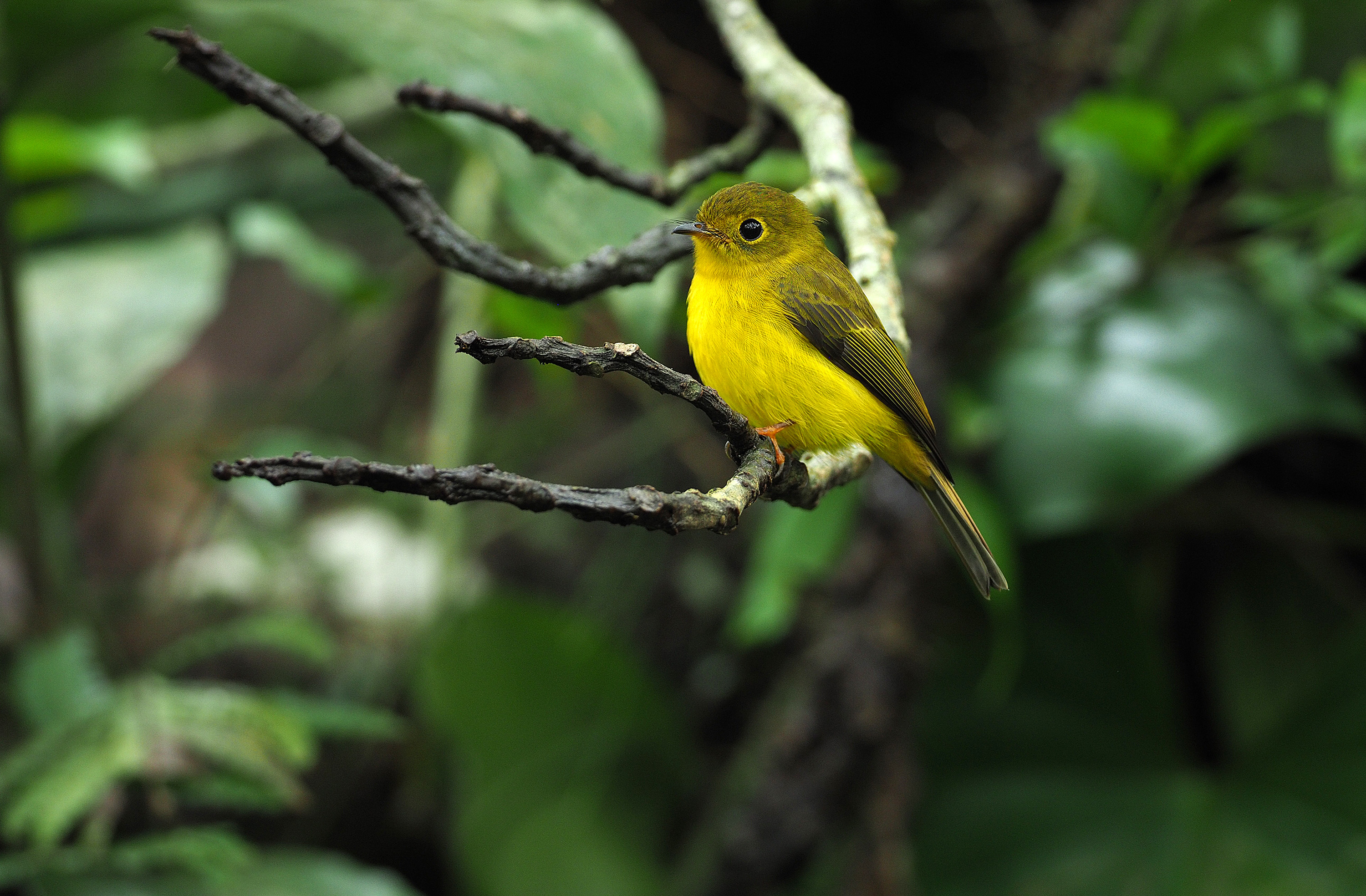 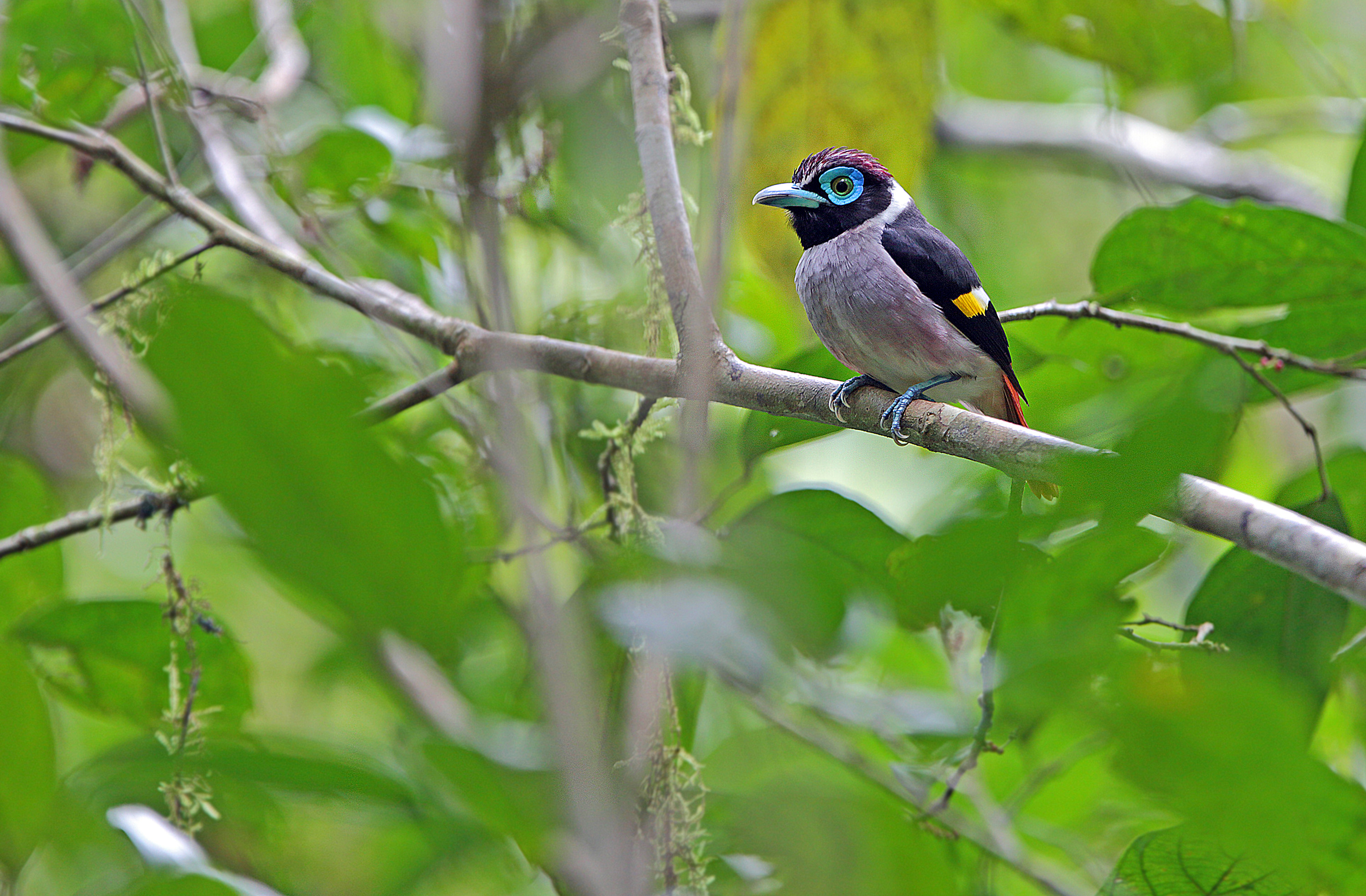 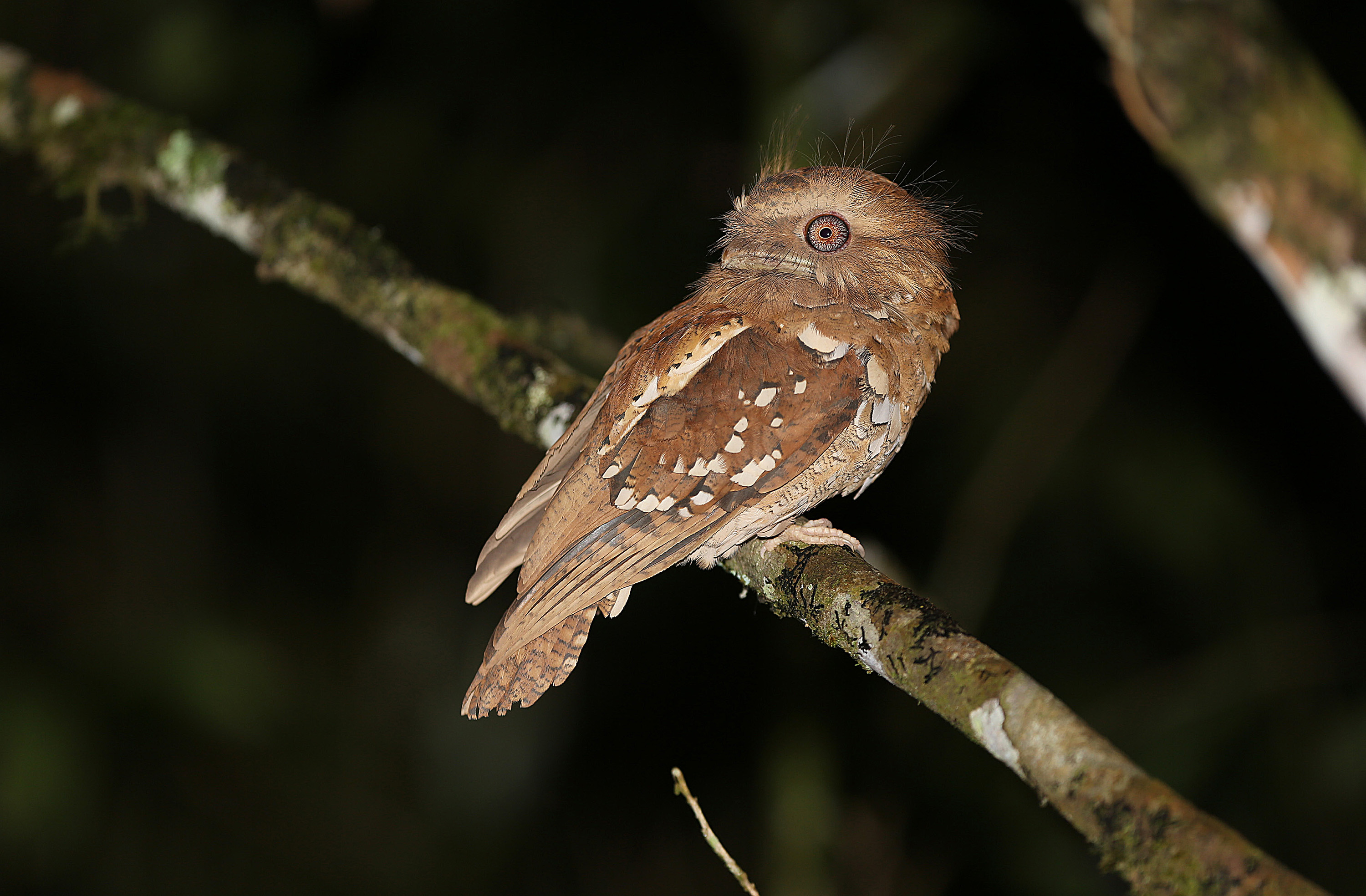 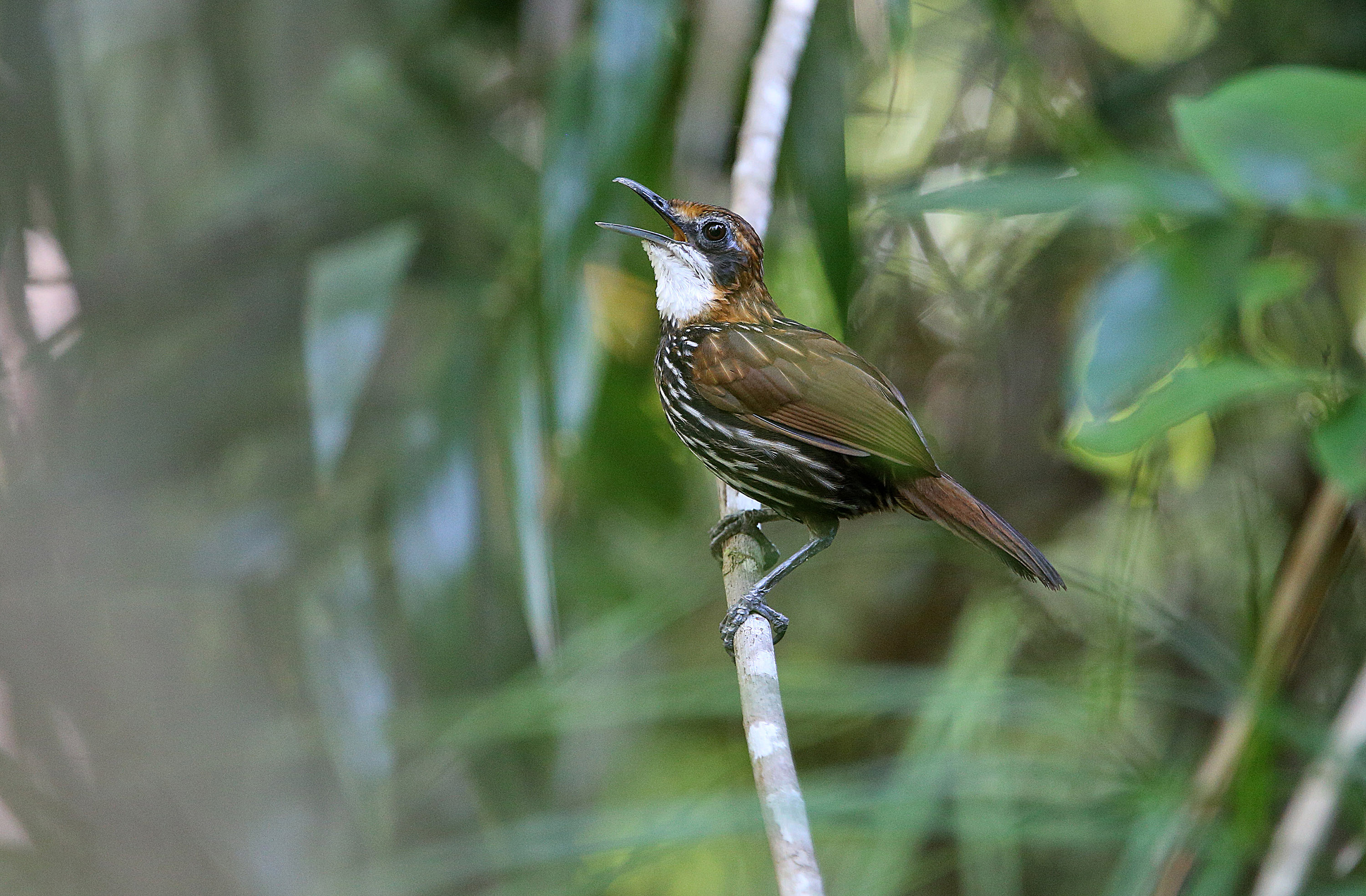 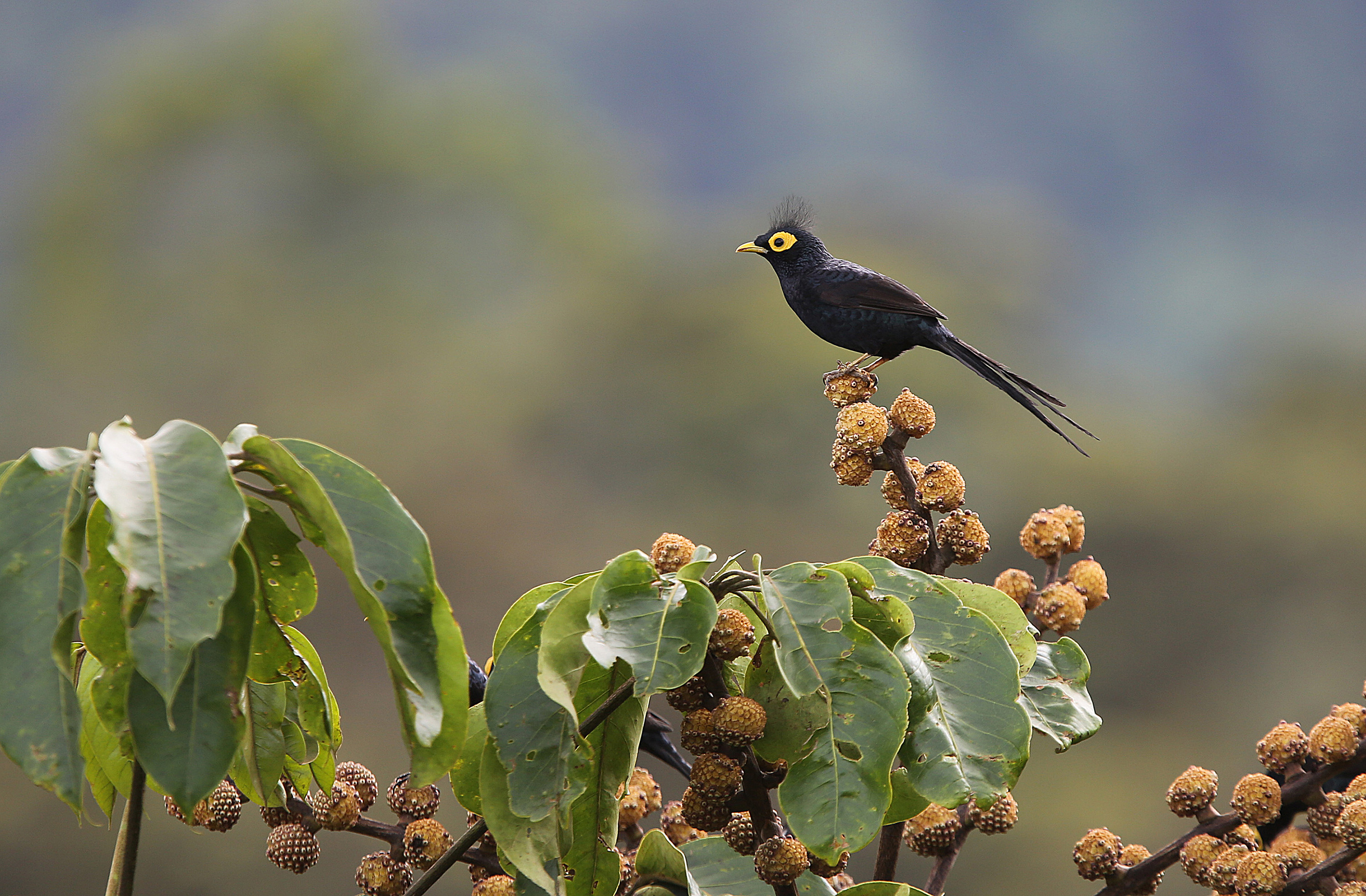 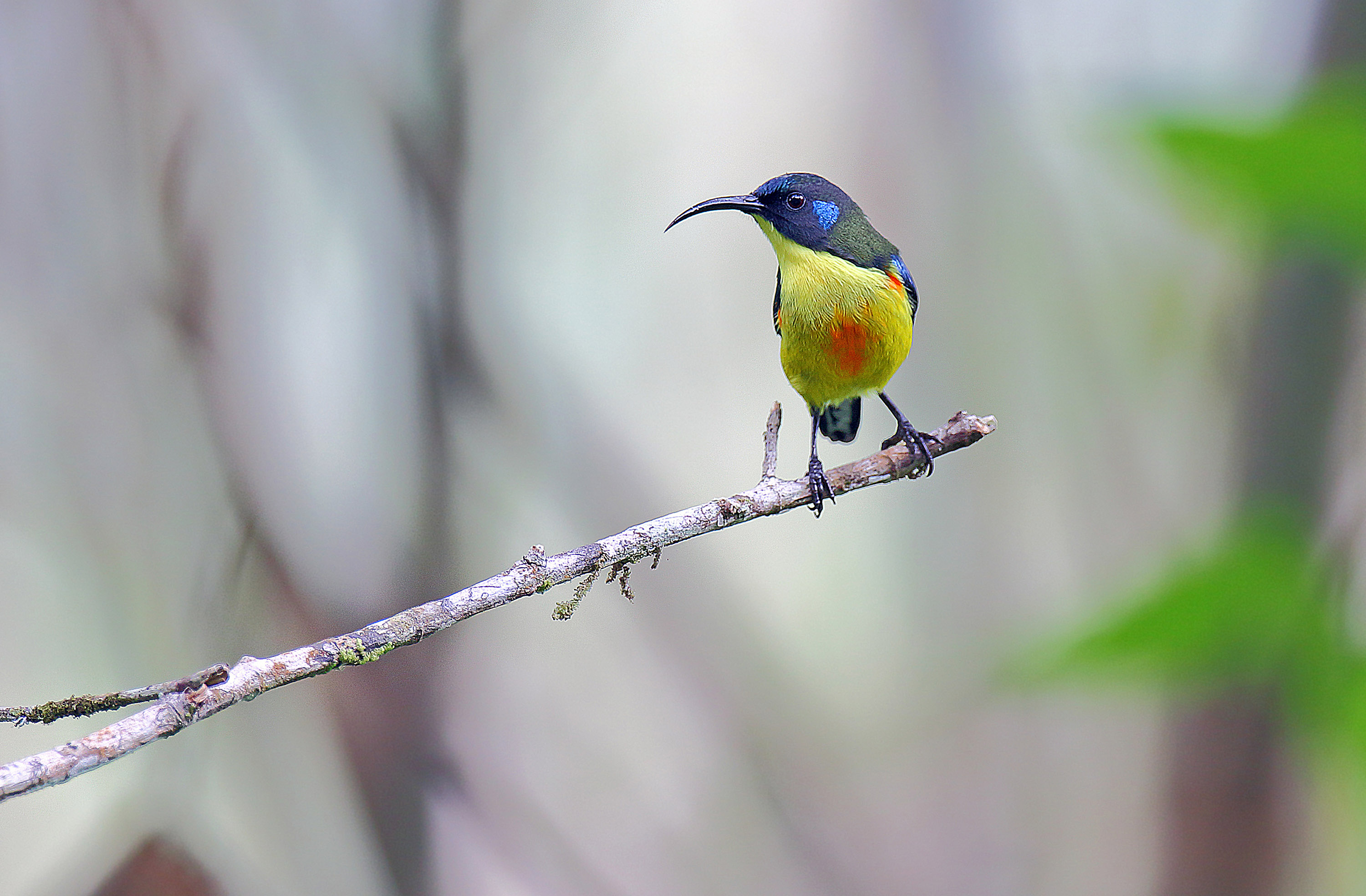 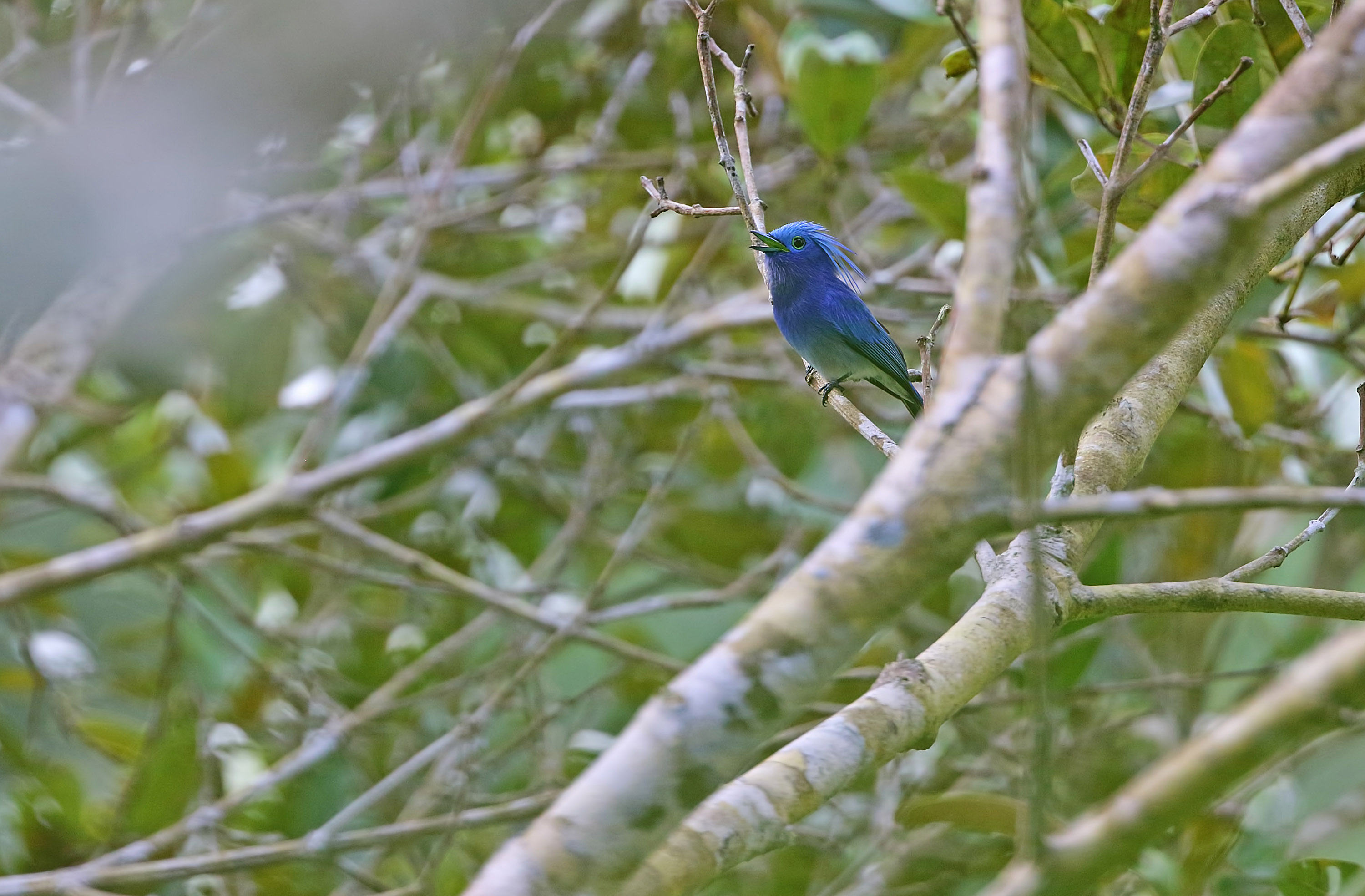 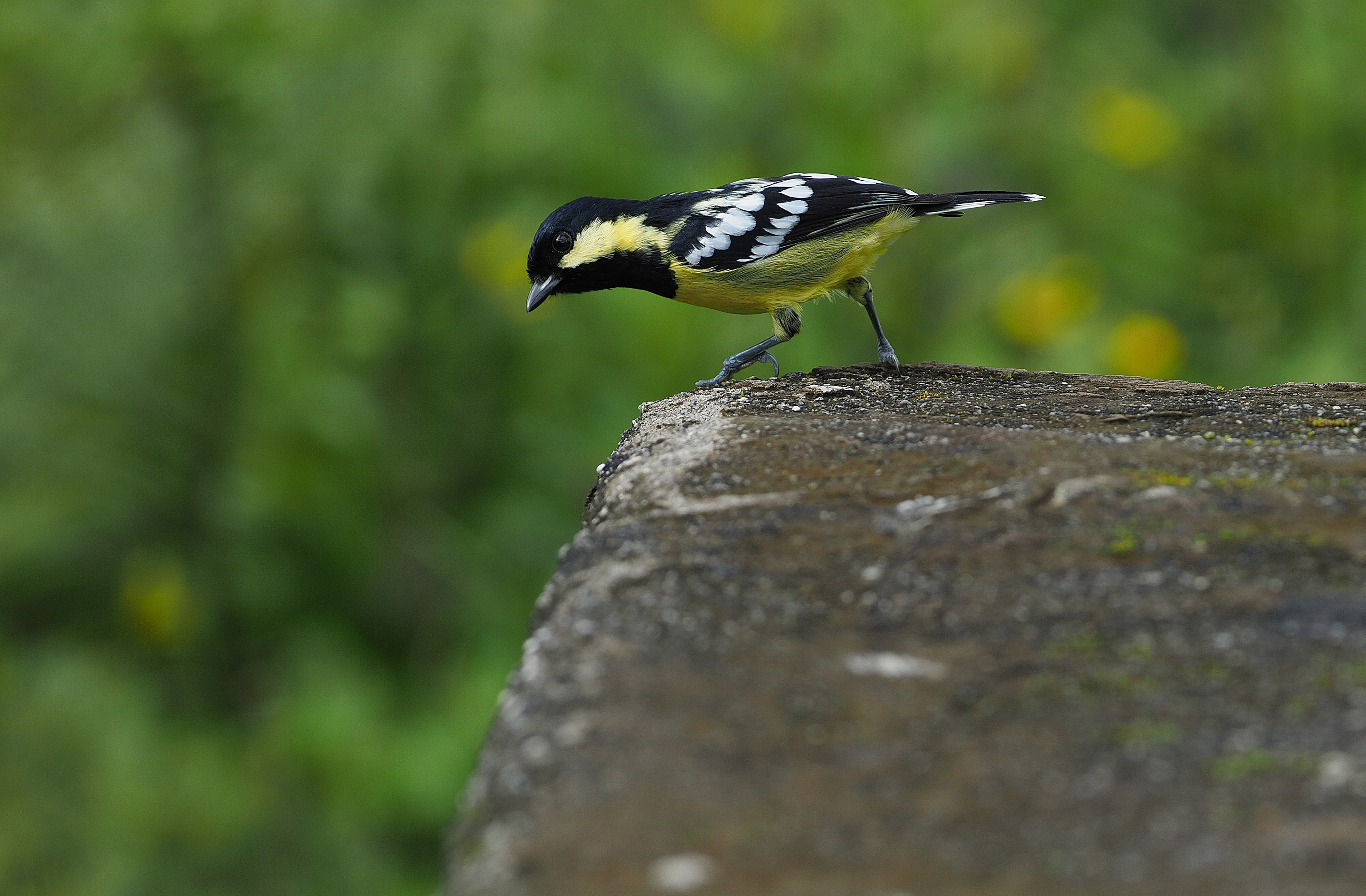 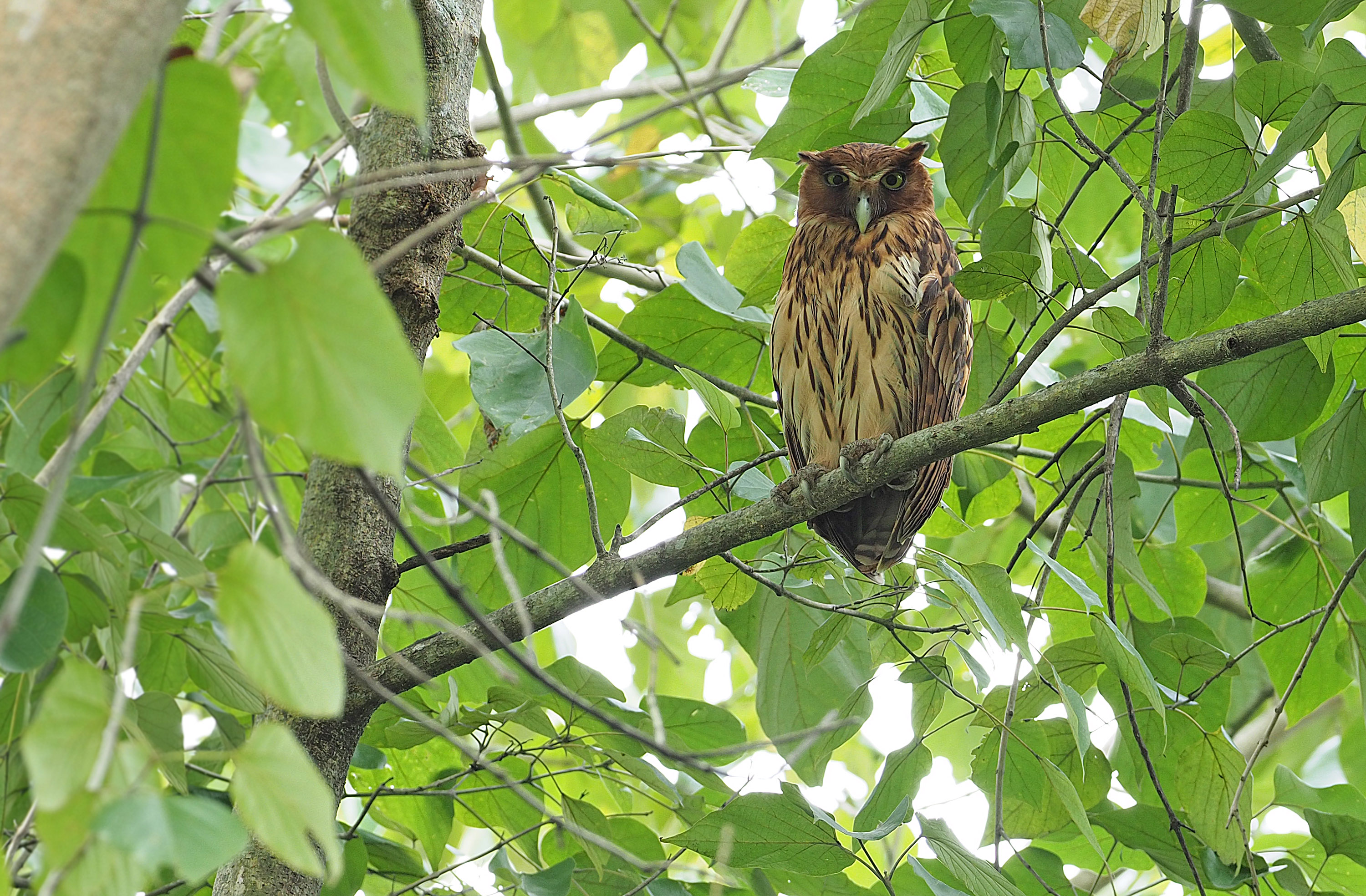 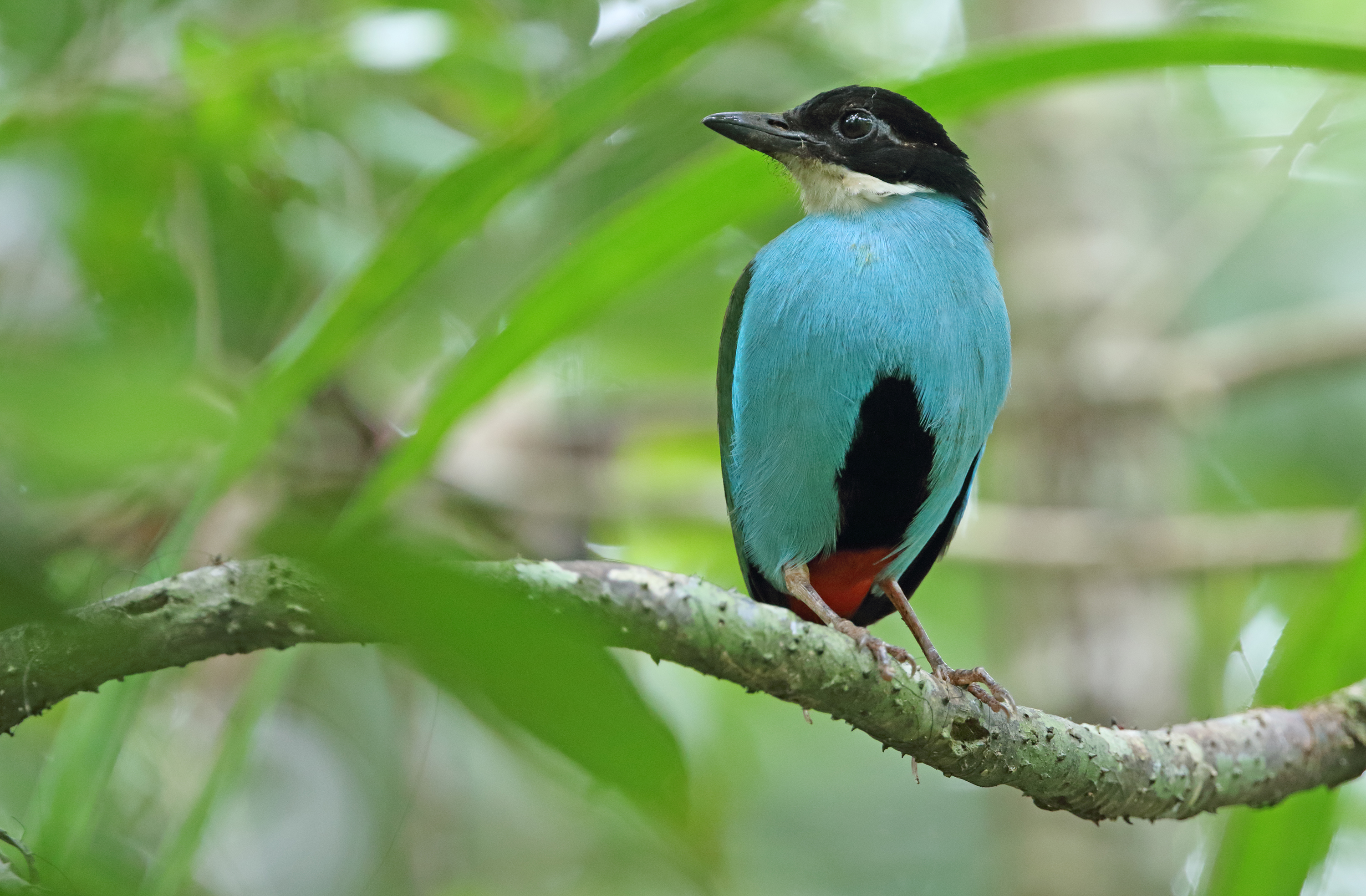 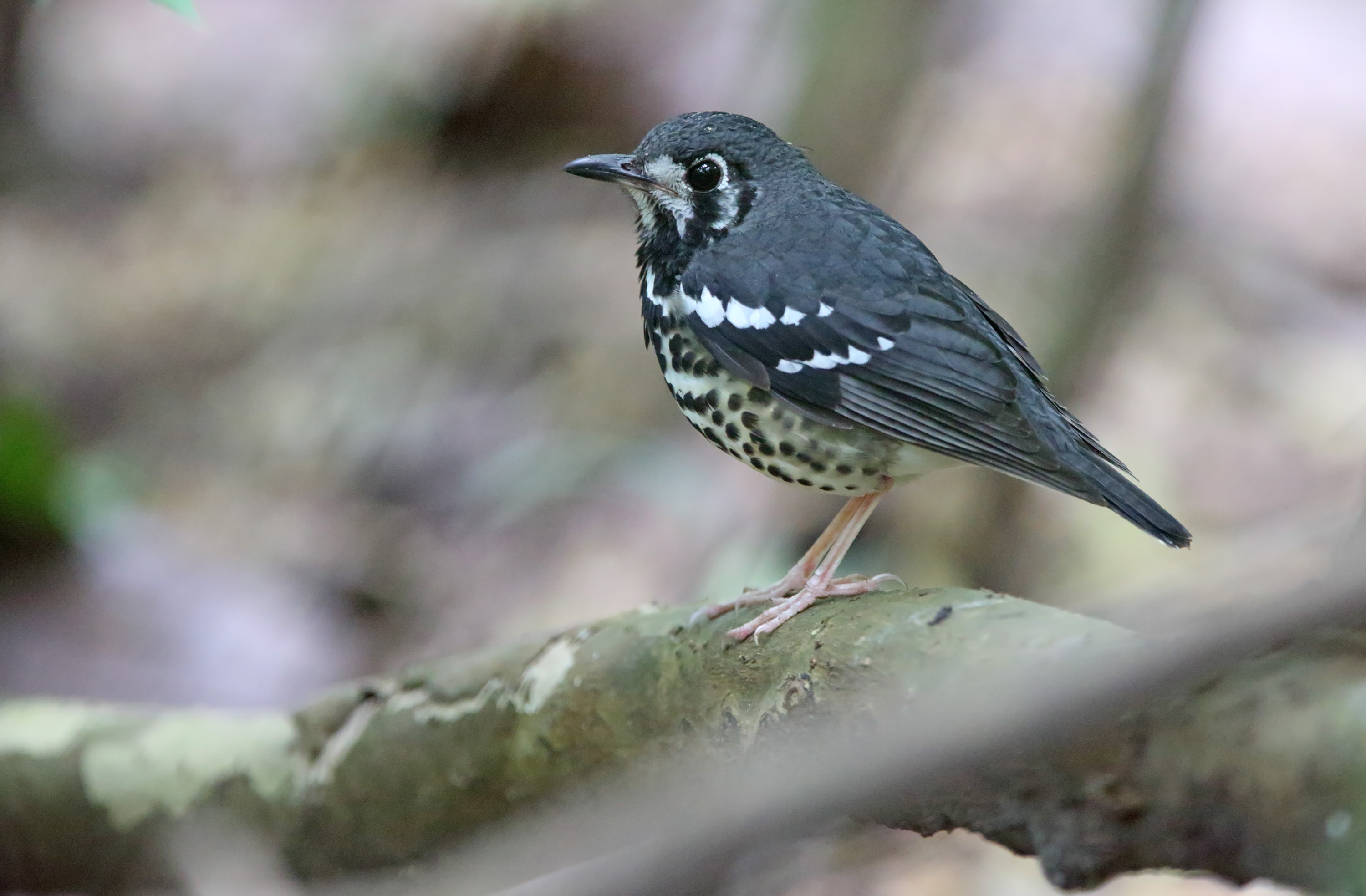 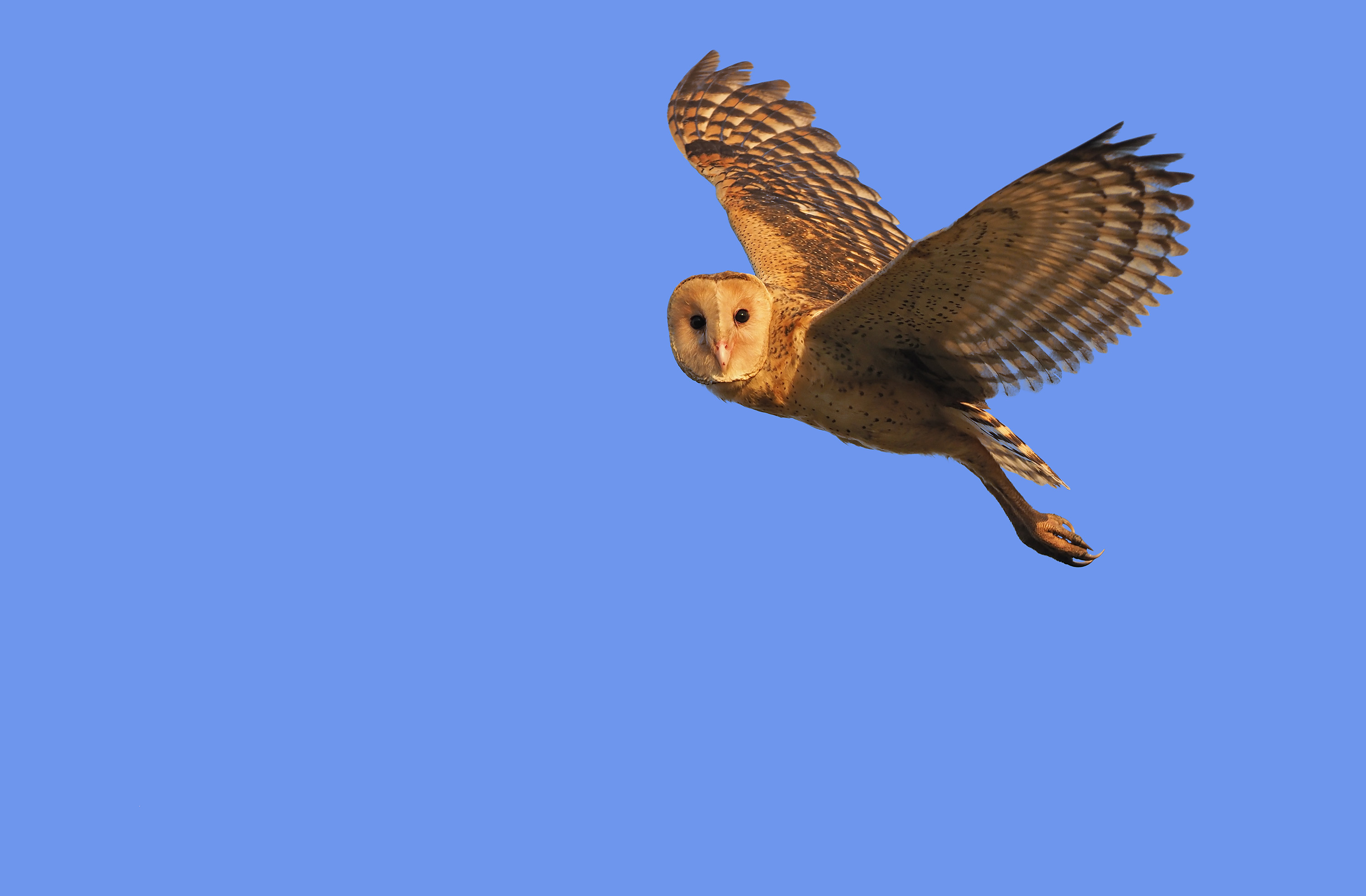 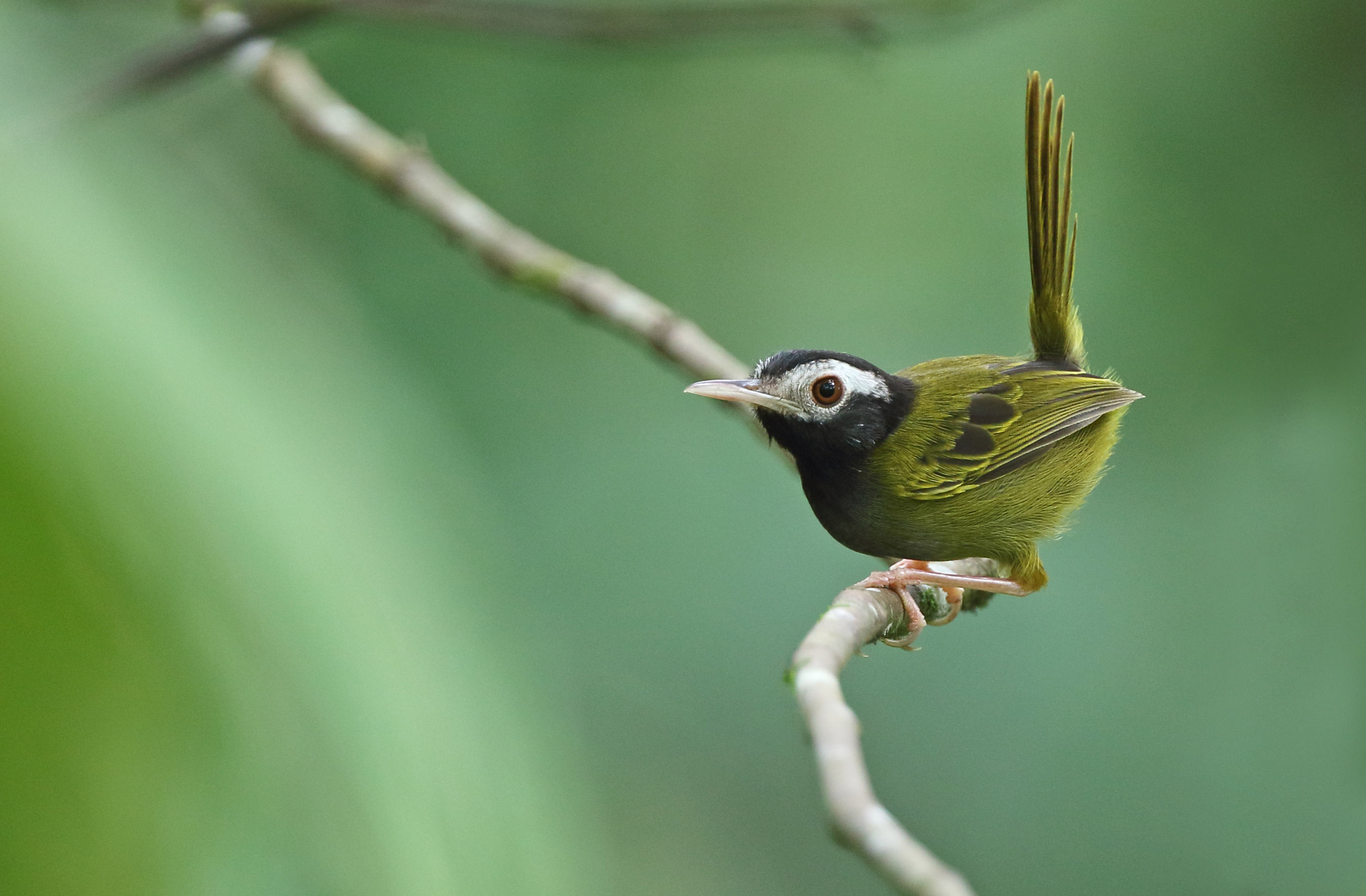 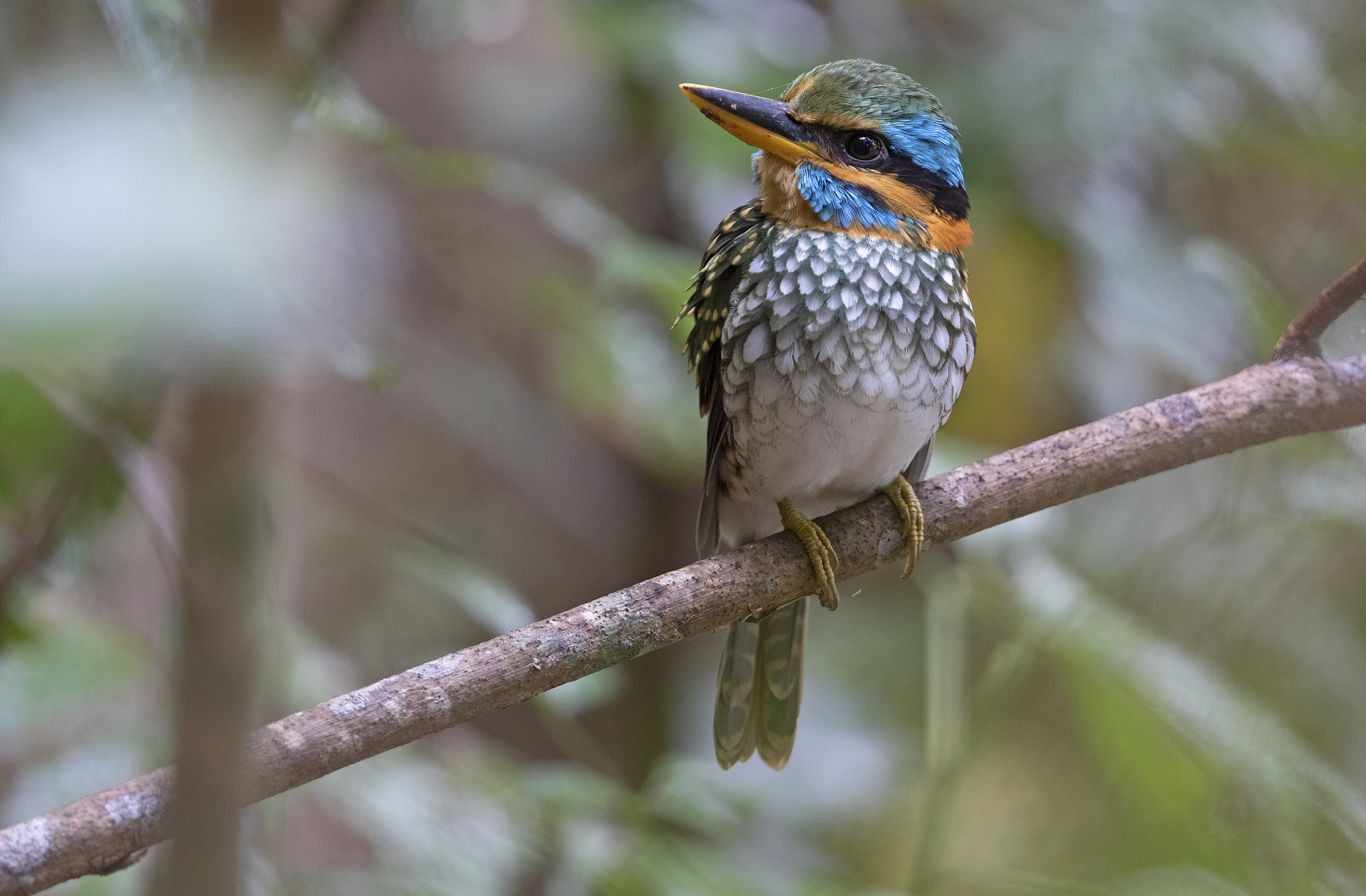